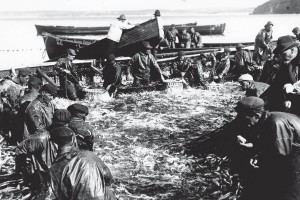 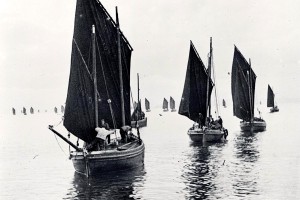 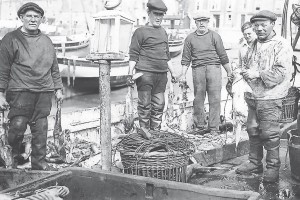 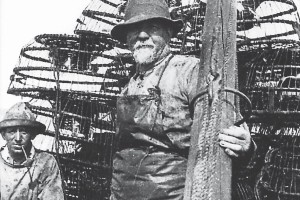 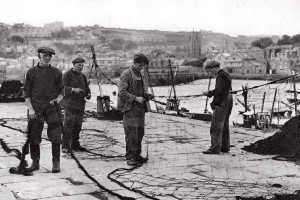 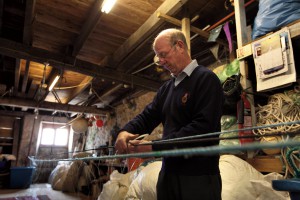 St Ives Fishing Industry
Fishing and mining were until quite recently the traditional industries and principal source of employment in Cornwall, and this was especially true in St Ives. Today however, there is no more tin or copper mining, and the fishing industry is considerably smaller. A hundred years ago over 250 boats and 1500 men fished out of St Ives alone, but by 2009, there were just 581 registered boats and 867 fishermen in the whole of Cornwall.
To read more about the St Ives Fishing Industry Click here (pdf)

Porthmeor Studios and Cellars and its neighbours along Porthmeor Beach were all constructed during the 1800s for the pilchard seine industry. This was the principal fishery in Cornwall and St Ives for most of the period for which records exist, employing thousands both afloat and onshore. Annual catches at St Ives frequently exceeded the whole of the rest of Cornwall combined, with the largest recorded catch in a single day taken at St Ives in 1847, when over 57,000,000 pilchards were caught.

Pilchard seining in St Ives was a huge commercial industry, and involved the whole community: men, women and children. At its heart was an enormous 300 metre long seine net, weighing 3 tons, and carried on the seine boat which was propelled by six or eight rowers. Vast shoals of pilchards would come close inshore, and the seine net would be rowed around the shoal to enclose it (image 1) under the direction of a huer, stationed on an adjacent cliff-top. The fish were transferred to dipper boats, brought ashore and carried to the pilchard cellars, where they were salted, and then put in barrels and pressed to extract the valuable oil. Most of the catch was then exported to Italy. Pilchards are still caught today using very similar techniques, although now offshore, and are marketed as Cornish sardines.

The St Ives drift net fishery (image 2) was second in importance only to the pilchard seine fishery, but in contrast to the short seining season, it offered employment almost all year round. The principal fish caught were herring, pilchard and mackerel, each having its own season and requiring a different net. The boats were known as Cornish luggers, and the smaller 32’ to 38’ drifters with 4 crew were known as pilchard boats, fishing out of St Ives principally for pilchards and herring. The larger 43’ to 50’ luggers with 7 crew fished for mackerel and herring were called mackerel boats. These boats could travel further afield, and would fish for herring in the Irish Sea in early summer, before crossing over and fishing down the east coast, returning to St Ives in September. Drift netting was gradually superseded by trawling.

To read more about the Herring Fishery Click here (pdf)

Longlining for rays and dogfish

Long line fishing uses a long line sitting on the seabed with cords branching off it, each ending in a baited hook (image 3). Originally this gear was usually set and recovered from 4 oared gigs working close inshore, but the advent of motors allowed boats to travel much further. They could now 25-35 baskets, each with 150 hooks, with a long line up to 9 miles long, taking 2 hours to shoot, and 9 hours to recover. This method was replaced in the 1970s by netting.

Cornish fishermen used the distinctive dome shaped willow pot, which was effective but would only last one season, and a much stronger crab pot made of wire was developed in St Ives (image 4). The pots were worked in tiers of 10-30, and each pot was baited with salt mackerel or gurnards. Nowadays most pots are factory made parlour pots which have a separate compartment, the parlour, which makes them more escape-proof and easier to recover the catch.

Crab nets, or crawfish nets (image 5), were originally made of cotton which has two drawbacks, it rots, and since they were worked on rocky ground to catch crawfish, they were often ripped. The adoption of rot proof nylon monofilament nets in the 1960s led to a revival of shellfishing and at its peak twenty boats fished out of St Ives, but within a few years the crawfish stock was fished out. Fishermen then diversified into using gill nets and tangle nets (image 6), which are moored either end, have a weighted foot rope to keep them on the seabed, and are held up by a floating head rope. The size of mesh, location and length of time is specific to the fish being targeted.

Trawling involves towing a stocking shaped net along the sea bed to catch fish. However to trawl effectively requires large boats and powerful engines and Cornish fishermen started to invest in larger boats in the second half of the 20th century, which are not suitable for the harbour at St Ives. Trawling now accounts for about 50% of fish landings in Cornwall, and Newlyn is now one of the largest fishing ports in the UK.